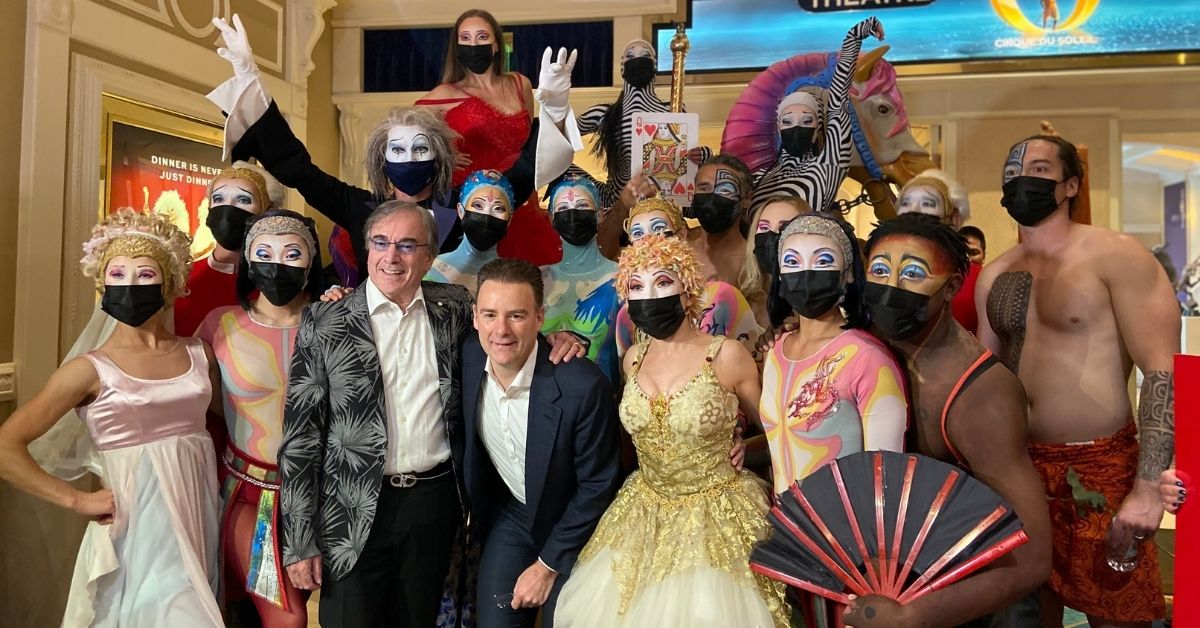 A surreal aquatic fairytale returns to the Las Vegas stage

Guests and employees cheered as the cast and crew of Cirque du Soleil “O” paraded through the Bellagio Hotel & Casino. A cast member wearing a zebra print, skin tight costume rode on top of a carousel horse leading the way. Through the casino, they journeyed back together to the stage.

The rest of the cast wore costumes resembling something from “Alice in Wonderland” while following close behind the carousel horse. Some of the performers twirled in their sparkling dresses while others waved with bright faces towards the people watching.

The guests in the resort gathered in crowds to shout, whistle and congratulate the cast. Some people pulled out their phones to film the celebration.

As the second Cirque du Soleil production to reopen, (Mystere being the first), after about a 15 month pause, Vegas is beginning to feel like the Entertainment Capital of the World again.

Tears of Joy Nearly Spilled from the CEO

CEO of Cirque du Soleil, Daniel Lamarre, beamed with joy as he walked in the parade alongside the cast. He expressed how he felt “a lot of emotion” and noted that the performers are “very excited” to revive the “O” show.

Nearly in tears, Lamarre said, “Those people are so happy to be back on stage. To celebrate the comeback of Cirque in Las Vegas is so symbolic. I’m emotional right now, but it’s normal.”

He said he never doubted the show would come back and that he’s been doing interviews all over the world for Cirque du Soleil, a global brand.

Lamarre emphasized, “Reopening in Vegas is a huge sign, not only for the U.S. market, but the world. Because now people are all eyes and ears on Vegas.”

When asked why “O” is such a special show, he said, “It’s the best show in the world right now. No other single show sells as many tickets as ‘O’ does. The way it’s created you can see the show 10 times and you haven’t seen the whole show. There are so many dimensions of that show and that is why it’s unique.”

Reopening with a Spectacular Performance

When stepping into the theatre, the first thing I saw was a large velvet red curtain concealing the stage. The smell of cool water filled the air. The chill temperature was a welcomed contrast to the over a hundred degree heatwave outside.

Above the audience, a spiral fixture hung foreshadowing a performer to be above the crowd at some point in the show (Spoiler Alert: This happens during the opening act).

The “O” show felt like a surreal aquatic fairytale that weaved in special effects that spoke to all the senses with elements of water, fire, fog and an emotional music score. A performer burned incense spilling a calming, earthy scent into the audience. All these factors combined produced a hypnotic production.

During moments of the show when performers dived from a high ceiling rafter into a glittering pool of water or spun multiple blazing batons, audience members gasped and jaws dropped all around me.

A couple of clowns tried to fix a hole in their cartoonish floating roof, and the crowd roared with laughter at their silly expressions and funny gibberish. The comedy duo delivered genius physical comedy that offered the crowd comedic relief between intense scenes.

Countless times between acts viewers clapped in awe of a fantasy world unfolding right before their eyes. The enchanting set transitions appeared seamless. This show is the ultimate escape from reality. It’s a larger than life and otherworldly place which feels parallel to the neon city itself in ways. “O” truly is a Vegas spectacle.

“O” is a Timeless Fairytale

During the curtain call, the cast and crew received a well-deserved standing ovation. The show, layered with unique characters and mind blowing acrobatics, is an unforgettable experience.

With such a wildly imaginative world full of stories within stories, a guest would have to see the show multiple times to even scratch the surface of this complex world. That is part of the magic in any Cirque production. Cirque gives the audience a timeless treasure similar to a children’s fairytale book. Even though a child has read the tale countless times, they still go back to feel the rush of that adventure over and over again. That is how it feels to see the “O” show.