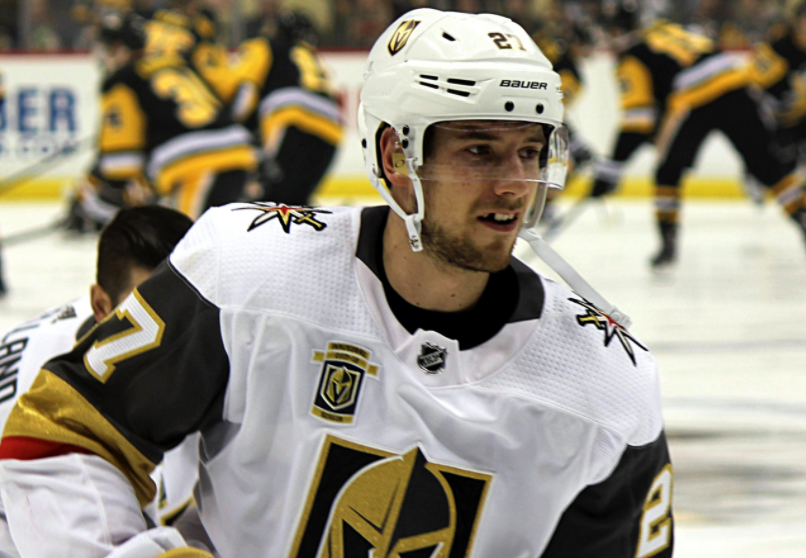 Vegas Golden Knights defenseman Shea Theodore continues to be a champion in the fight against cancer.

On November 12, Theodore created a fund with the Comprehensive Cancer Centers of Nevada, in partnership with the Susan G. Komen Nevada organization. The fund’s name is Kay’s Power Play, in honor of Theodore’s late grandmother, who died in June from breast cancer.

Theodore and the cancer centers presented the fund with a $50,000 check. The donations will go towards raising awareness about breast cancer and making mammograms more accessible for women in Nevada, specifically for those who are without insurance.

“I want people to get tested,” Theodore said about the start of the fund. “If this can help save lives, then that’s all I’m trying to do.”

The 25-year-old knows a lot about the importance of getting tested. He still thinks about the chain of events that led to his shocking testicular cancer diagnosis in 2019.

The Golden Knights had just lost to the San Jose Sharks in the first round of the 2019 Stanley Cup Playoffs. Theodore decided he wanted to continue playing hockey and accepted an invitation from Canada to play in the 2019 IIHF World Championship.

Following the gold-medal game, a tournament official asked Theodore to accompany him to an isolated room. A group of men told Theodore he failed the drug test he took before the quarterfinals, showing elevated levels of the hormone hCG.

Bodybuilders use the hormone to counter the effects of anabolic steroids, but it can also be a sign of testicular cancer. Knowing full well he had not consumed any performance-enhancing drugs, Theodore underwent medical tests when he returned to Las Vegas. It turned out he had three types of testicular cancer, one of which was aggressive.

Thankfully, doctors were able to remove the cancerous mass before it spread, so he did not have to undergo chemotherapy. Theodore returned to the team for training camp before the 2019-20 season, much to the delight of the organization.

Despite the scare, Theodore knows how important early detection was. “If I had not taken that test, I don’t even want to think about how differently my life could’ve turned out,” said Theodore in his article with The Players’ Tribune. “Whether or not you believe everything happens for a reason, what happened to me feels like a miracle.”

A Moment With Grandma

On November 21, 2019, the Golden Knights were celebrating Hockey Fights Cancer night at T-Mobile Arena. Theodore’s grandmother, in the midst of her battle with breast cancer, came out to do the ceremonial face-off with her grandson before the game.

Theodore said sharing that moment with Grandma Kay was one of the coolest moments of his life. To feel the support of everyone inside the arena on that night was indescribably special.

Cancer is an ugly and awful disease, but it is something that society shares as a common bond. Theodore laughs at the butterfly effect that led him to this point, while also realizing how lucky he was. After enduring his personal journey, he is now dedicated to keeping Kay’s legacy alive.

“Unfortunately, she’s no longer with us, but in her honor, I think Kay’s Power Play is going to help a lot of people.”

Something tells me that Grandma Kay is quite proud of her grandson right now.