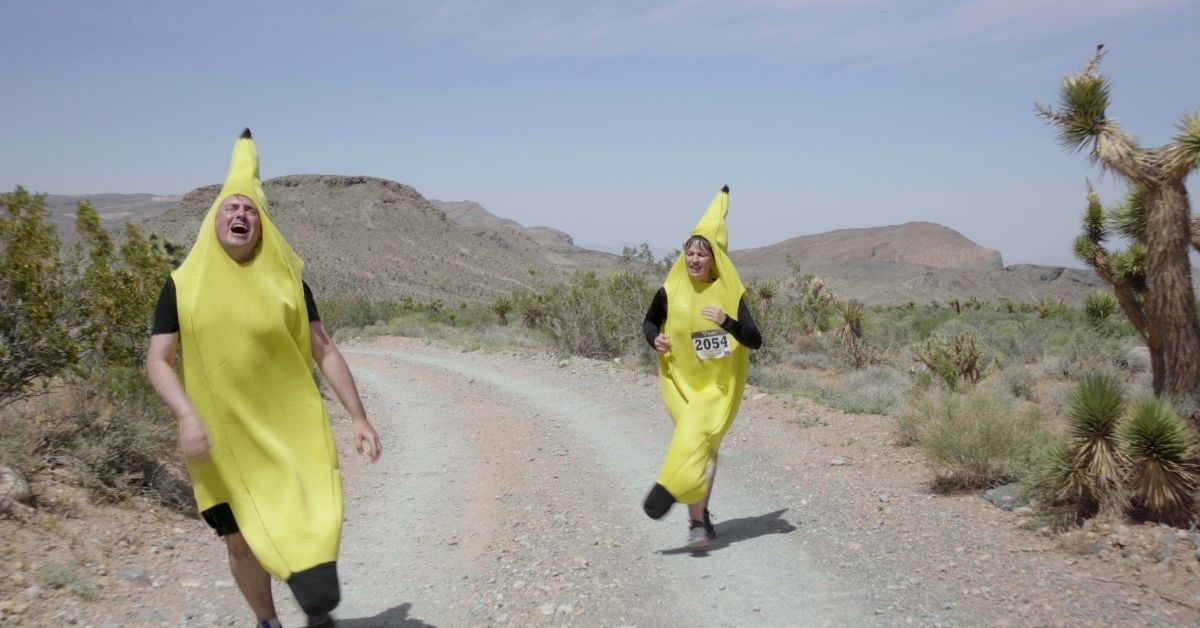 After meeting as students in UNLV’s screenwriting MFA program in 2010 and achieving recognition—via screenwriting competitions and the influential Black List website—that never quite led to the industry success they were hoping for, Anthony Guidubaldi and Keith Strausbaugh decided to take matters into their own hands with the mockumentary feature film “Marathon,” which is out now on VOD.

“We decided, let’s actually write something that we can shoot ourselves, that we can direct,” Strausbaugh explains. “We purposely chose mockumentary because of the shooting style, and the editing style as well, lent itself well to low-budget filmmaking.”

Written and directed by Guidubaldi and Strausbaugh, “Marathon” will look familiar to fans of Christopher Guest’s mockumentary comedies like “Best in Show” and “Waiting for Guffman,” which set the standard for the genre. Strausbaugh cites other mockumentaries as the duo’s main influences, though, including Rob Reiner’s “This Is Spinal Tap,” Taika Waititi and Jemaine Clement’s “What We Do in the Shadows,” and Belgian cult movie “Man Bites Dog.”

Like Guest’s movies, “Marathon” follows a group of oddball characters preparing for a major event in their chosen field, in this case a Nevada desert race known as the Devil’s Canyon Marathon. Strausbaugh had experience running cross-country in high school, and the sport was also chosen for its budget-friendliness. “It’s so simple: It’s just people running,” Strausbaugh says. “It’s easy to shoot. The wardrobe is simple. It all just kind of fell together.”

Guidubaldi and Strausbaugh drew from the local stand-up and improv comedy scenes to cast “Marathon,” working with performers whose resumes include Cirque du Soleil, Blue Man Group and Absinthe, among other Las Vegas productions. “The goal was to get every single funny person in Vegas in this movie,” Strausbaugh says, although the cast also includes performers scouted from improv companies in Los Angeles. The result is a lineup of actors who can reliably find humor in situations ranging from mundane to bizarre.

The talented cast also gave the filmmakers the confidence to include plenty of improvisation, a hallmark of mockumentaries, in the final film. “You need the script, but you also have to be prepared to run wild with it,” Strausbaugh says. He estimates that up to 40 percent of the movie was improvised, and the filmmakers had 40-50 hours of footage to distill into the 82-minute feature film.

“Marathon” was shot in 2018, with post-production finished in March 2020, just as the film industry was shutting down, along with everything else across the country. Strausbaugh and Guidubaldi opted not to submit to virtual film festivals, instead contacting sales agents directly, a strategy that paid off with national distribution from Gravitas Ventures.

Strausbaugh, who recently accepted a position teaching screenwriting at Point Park University in Pittsburgh, is hopeful that the success of “Marathon” will allow him and Guidubaldi (who is still based in Vegas) to make another mockumentary as their next project. He doesn’t hesitate to say that they’d shoot the next movie in Vegas, too: “There’s too many funny people there not to put them onscreen.”