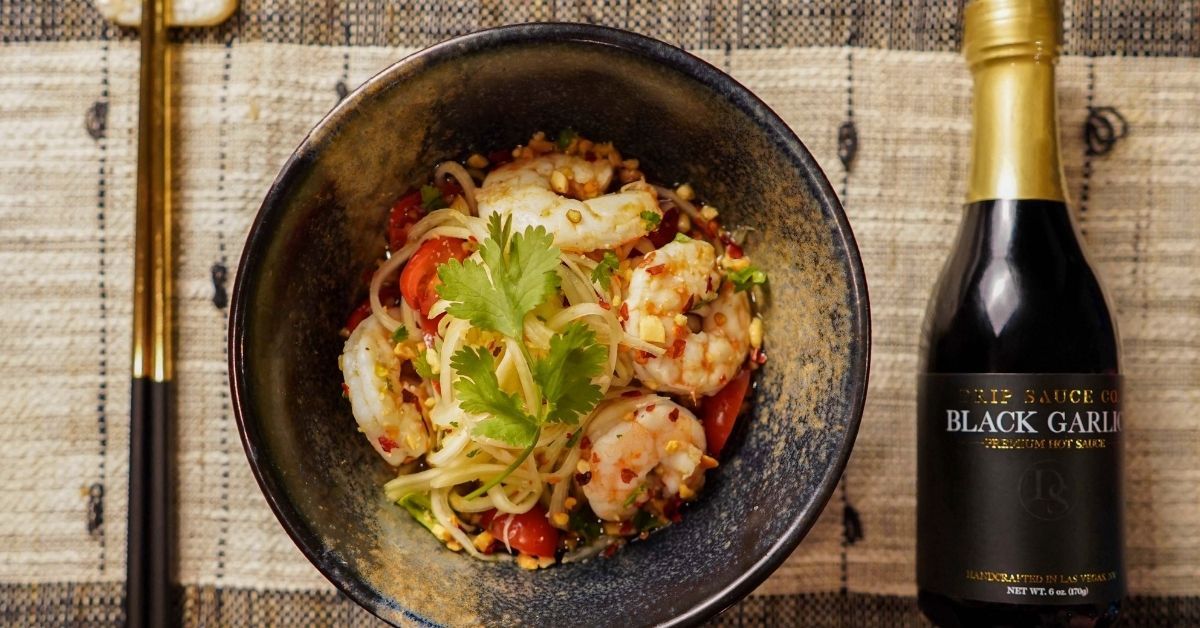 Made in Vegas: The Spice is Right with Drip Sauce

Las Vegas is home to world-class resorts, restaurants, shopping and nightlife—and now, Drip Sauce Co., a new local company, has captured the city’s luxurious essence in a bottle. Inspired by the glamorous nightlife on the Strip, John Xerxes Villanueva and his wife Melissa Jane Villanueva, aim to give the hot sauce industry a stylish new look. Their debut Black Garlic Hot Sauce is the result of John’s love for cooking and Melissa’s penchant for pretty things.

The Story is in the Sauce

Hot sauce, but make it fashionable.

“We did research and development for about a year until we officially launched in January 2021,” says John, 35, who works in banquet service at MGM Resorts International. “When the pandemic hit, we had to figure something out after the convention business went away.”

However, the sauce was not his first idea. As an avid cook, John wanted to keep making food, a skill he developed as a child cooking for his busy working mom in the Philippines. He moved to Washington state when he was 16-years-old and a few years later, he ended up in Las Vegas where he went to culinary school.

The young couple put their minds together and decided to start a meal prep business. “Most of the customers wanted to keep it simple with just salt and pepper, so John lost his passion for what he was doing,” explains Melissa, 31, who works in cocktail service at Caesars. They knew their sauces made their food special, so they changed directions and decided to sell it.

“We had to learn how to think fast and move slow and not be eager to get ahead of the process,” says John. Since neither he nor his wife had any idea how to bring a product to market, the unprecedented timeframe made it harder to source ingredients and obtain licenses. “It was very difficult to make moves during the pandemic,” says John. “However, it gave us the time and focus to really fine tune our product and improve our craft.”

Where Can I Find Drip Sauce?

Get a magic blend of rich flavors all in one bottle.

The final result is a full-bodied, umami blend of roasted garlic, organic carrot juice, rice vinegar and habanero peppers that is handcrafted in small batches. “We love it with wagyu steak or Korean barbecue,” says Melissa. “I also use it instead of Sriracha in my pho.” The sexy black and gold bottles retail for $11.99 (6 oz.) and $17.99 (10.6 oz.). In addition to selling online, it is also available at the Southern Highlands and Downtown Summerlin farmers markets on the weekends.

In late June, the company is excited to launch their new Peach Rosé Hot Sauce to coincide with the beginning of summer. Led by the flavor of organic white peaches, the sauce is aromatic and floral with a kick from the Carolina Reaper. Though it works well on salads and fish, it will also be marketed as a spicy dessert sauce.

As Drip Sauce Co. grows, the husband-and-wife-team want to create jobs and give back to the community. Their accomplishments are not just motivated by the number of bottles sold or the amount of public recognition they’ve received. Instead, John’s leading inspiration is the proud look from his mother, who still lives in the Philippines. “She worked hard, and now all of her sacrifice is not wasted,” he says. “I hope that one day I can bring the whole family here. Goals, for sure.”