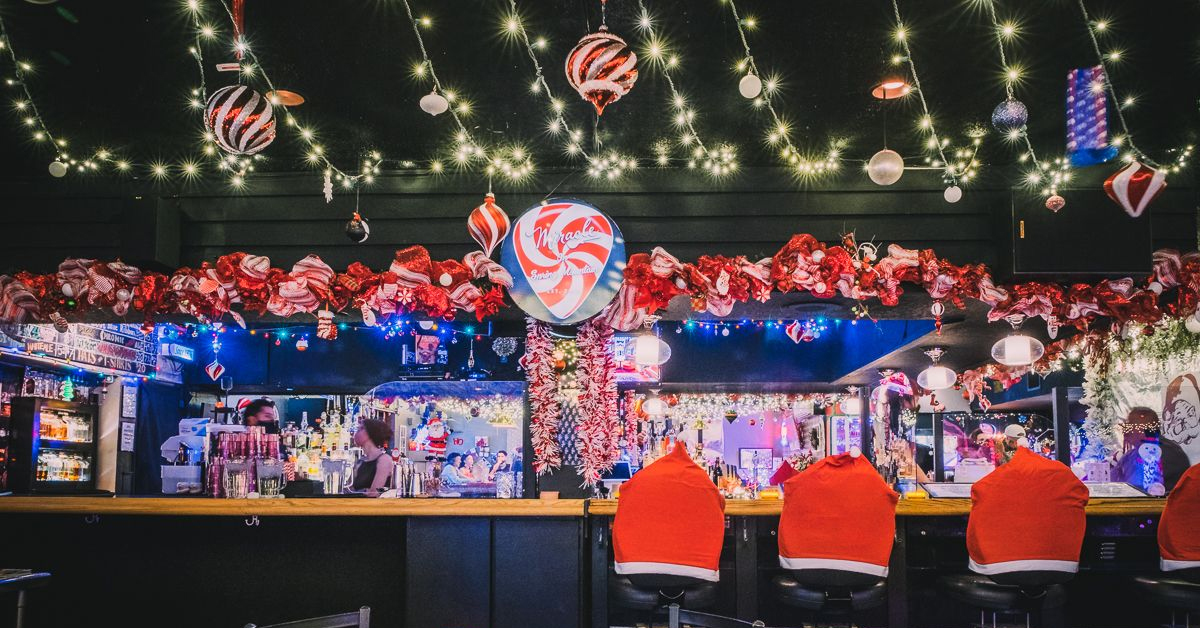 ’Tis the Season for Live Music, Cocktails and Pizza

WHAT: Miracle on Spring Mountain
IT’S … A holiday pop-up concept at The Sand Dollar Lounge
OPENED: November 23, 2020
WHO’S BEHIND IT: Owners Anthony Jamison, Benito Martinez and Nathan Grates
FUN FACT: Sand Dollar estimates it spent $15k on winter holiday decorations last year, and will top that number by $7k this year.
LOCATION: 3355 Spring Mountain Road
HOURS: Sunday to Saturday | 6 p.m. to 4 a.m. (opening early at 2 p.m. as of Friday, November 27)
WEBSITE: The legacy lives on at Sand Dollar Lounge
INSTAGRAM: Come for the cocktails, stay for the pizza

For the second year in a row, the historic Sand Dollar Lounge is transforming into “Miracle on Spring Mountain,” a holiday pop-up experience with festive lights and decorations. To keep up with the latest government mandates, customers are asked to make reservations in advance with no more than four people per table.

A few fun party nights are planned: Grinch Day on December 7, First Night of Hanukkah (with free latkes while supplies last) on December 10, Candy Cane Day (think red and white striped outfits) on December 14 and Naughty or Nice on December 21.

Holiday-themed cocktails are served in festive mugs and glassware (which can also be purchased separately, making for great gifts and stocking stuffers). Some of the drinks have familiar names from last year, although a few of the recipes have been modified.

For example, the Snowball Old Fashioned previously had a bourbon base with walnut flavors. This year, the cocktail is made with rye and ginger syrup. Other highlights include the Fruitcake Flip served in a champagne flute with Jamaican rum, brandy, amaretto and fruitcake syrup and the Santa Rex, which blends chili-infused agave spirits with coconut and pineapple in a tiki-style Tyrannosaurus rex mug. (And yes, the T-rex is wearing a Santa hat.)

The corner pizza kitchen at The Sand Dollar Lounge quietly serves some of the best pies in town. Throughout the season, guest chefs will host special pop-ups to present pizza recipes of their own. They include James Trees of Esther’s Kitchen on December 9, Brian Howard of Sparrow + Wolf on December 13, Petrina Peart of Gaiya’s Harvest (specializing in plant-based catering) on December 16, Chris Decker of Metro Pizza on December 20 and Justin Ford of Yukon Pizza on December 23.

Paradise City Creamery will also bring its vegan ice cream to the Naughty or Nice celebration on December 23.

The Gift of Giving

The Sand Dollar Lounge has exclusive permission in Las Vegas to use the “Miracle” name, which began in New York’s East Village and spread throughout the country with official affiliates. The pop-up concept runs through New Year’s Eve and money raised throughout the season will benefit the Las Vegas Rescue Mission, including donations from a “Santa’s Twerk Shop” booth. Sand Dollar is also one of the few Miracle bars with live music (on Friday and Saturday nights).

Between costumed theme nights and the guest chef pizza pop-up series, there are plenty of reasons to return to Miracle on Spring Mountain between now and New Year’s Eve. As always, The Sand Dollar Lounge has some of the best cocktails in Las Vegas, and the selection is as compelling as ever during the holiday pop-up spectacle.

Tasty Tuesday Does Takeaway for the Holidays