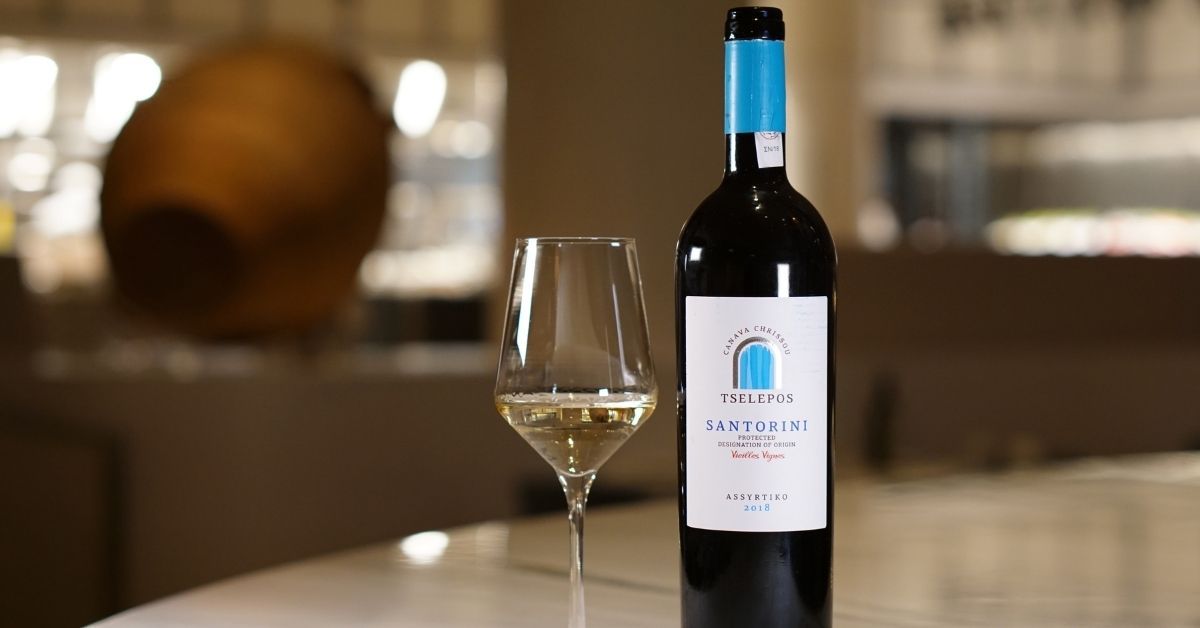 WHAT A PAIR: Assyrtiko and Greek Ceviche Salad at Estiatorio Milos

Assyrtiko is a crisp wine easily paired with seafood

Where: Assyrtiko (a-SEER-tee-ko) is a white wine named after the grape that is indigenous to the island of Santorini, located in the south Aegean Sea. The island is a vacationer’s dream, from its picturesque blue-domed white-washed buildings, black sandy beaches, fresh Greek cuisine, and indigenous wines, such as Assyrtiko. The grapevines grow on the windy bluffs of this crescent-shaped island, which is a dormant, but active volcano. Around 1600 BC, a catastrophic eruption resulted in the volcano’s collapse, which created the sea-filled caldera, which contributes to the island’s unique terroir and Assyrtiko’s unmistakable characteristics.

What: Assyrtiko is a dry white wine, driven by bright, citrus flavors, zippy acidity, and a distinct minerality that is reminiscent of slate or flint. Another unique feature about some of the vines in Santorini is that they are very old. The sandy soil and remote island location prohibited the phylloxera pest that devastated much of the world’s grape-growing regions during the 19th century. This soil means that some roots found in Santorini are centuries old, producing incredible, complex flavors.

Weather: Santorini is warm, and atop the bluffs, it can be windy. One of the unique observations of Assyrtiko is that the vines are trained low to the ground in the shape of a basket called kouloura to protect the fruit from the fierce sea breezes. Assyrtiko is an excellent example of a grape variety that showcases the terroir.

The Sip: This bottling of Assyrtiko is by an acclaimed wine producer, Tselepos. Yiannis Tselepos, who has run the winery in the Peloponnese since 1989, started working with the Chrissou family on Santorini in 2014. The grapes are sourced from vines that are 50-100 years old. Assyrtiko is so characteristic of its “place” that it’s not hard to imagine the location from which it comes when drinking it. The soil is comprised mainly of lava and sand. The wine sparkles with minerality that reminds of rocks and slate. The soil’s composition also contributes to the wine’s high acidity, accompanied by flavors of citrus, particularly lemon and grapefruit and tart green apples. The medium to full-bodied wine has a salinity, which is not surprising given its proximity to the sea. Assyrtiko’s popularity isn’t hard to explain. It retains its acid and mineral profile in a hot climate, stands alone as one of the most quaffable wines globally, and can also withstand some age. Overall, Assyrtiko is an easy-drinking wine, refreshing, crisp, and clean, making it easily paire-able with various foods, particularly seafood.

The Bite: The Greek Ceviche at Estiatorio Milos is a delicate medley of fresh fish and authentic Greek salad ingredients. Lavraki or Mediterranean Sea Bass and/or what is flown in daily is combined with crunchy diced cucumbers, cherry tomatoes, navy beans, and microgreens and bathed in a generous amount of fresh lime juice. Together with Assyrtiko in the glass, one might as well be overlooking the shimmering blue waters under Santorini’s purple skies at sunset.