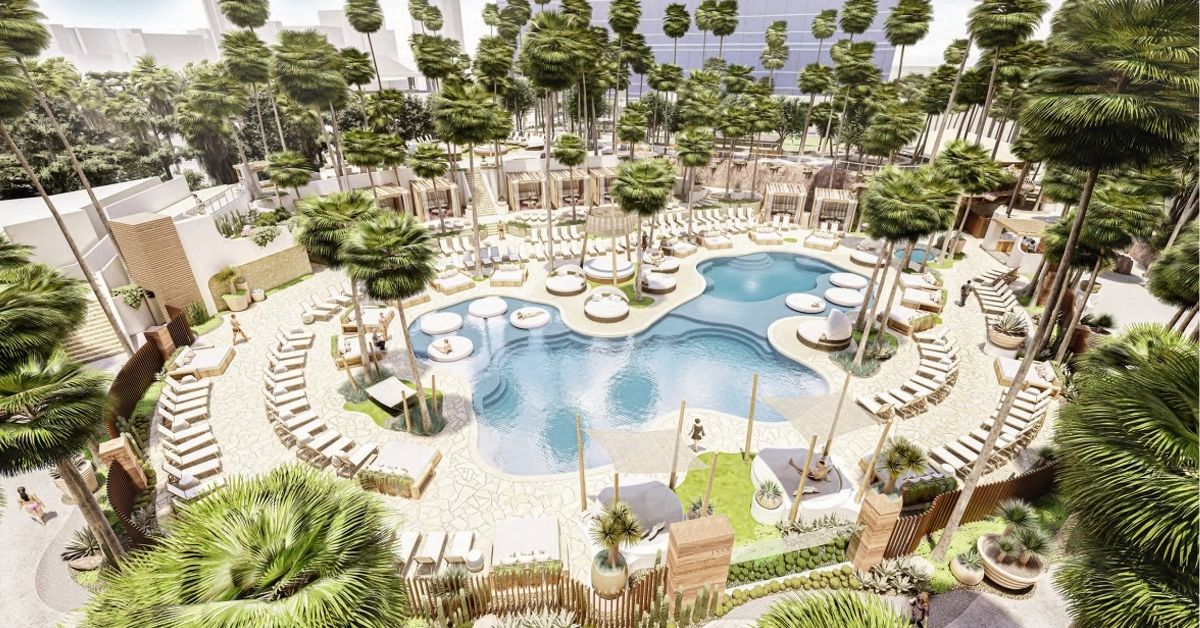 Virgin Hotels Las Vegas officially opens to the public at 6 p.m. today, taking over the property formerly known as The Hard Rock Hotel & Casino Las Vegas. So far, the new resort, which spans three hotel towers, appears to be a huge success after a multimillion-dollar renovation.

Here’s how Virgin Hotels lives up to the hype in Las Vegas.

While The Hard Rock was bold and brash, Virgin Hotels is more relaxed with design elements that borrow heavily from the Las Vegas desert. There’s more space, more natural light and clear evidence that—at least sometimes—less is more. The first example is the efficiency seen in the main valet area following the removal of The Hard Rock Cafe and towering neon guitar marquee.

Yes, The Center Bar was legendary, but its absence is also an improvement, opening up much-needed space on the casino floor while allowing the main entrance and lobby (now called “The Junction”) to be less cluttered and more welcoming. Wide open sight lines now stretch from the front entrance and through the casino floor to the pool deck.

Perhaps the biggest question facing visitors—where to eat first? One Steakhouse, formerly MB Steakhouse at The Hard Rock, is a great example of keeping what works while changing what can be improved. Owners Michael and David Morton have retained Executive Chef Patrick Munster (and much of the old menu) while adding interactive elements like tableside carving and Japanese-style surf-and-turf charcoal grilling.

The biggest changes are in the design. The bar is larger and less secluded from the energy of the casino floor. An overhead LED fixture, made of more than 3,000 glass pieces, slowly changes color over the course of an evening. The main dining room has low ceilings, burnt-wood paneling and touches of whimsical decor. The upstairs lounge has windows that open wide for an al fresco feel when the weather is appropriate.

Night + Market is shaping up to be the secret weapon of the resort’s culinary scene. The open dining room has a casual side but serves the same acclaimed Thai fusion by Kris Yenbamroong that’s already proven to be a hit in three L.A.-area restaurants. The chef describes the food as having a SoCal influence, and the drunken noodles with pastrami from Langer’s Deli in Los Angeles are a great example.

Most of the specials will be specific to Las Vegas, and a raw bar is in the works beginning with two seafood towers. The restaurant also has a strong focus on natural wines with a James Beard Award-nominated list.

Casa Calavera, which replaces Pink Taco, is big on “Instagrammable moments,” from the iron-and-wood throne and flowered wall by the main entrance to the large murals painted by Mexico City artists. Even the food is photogenic, especially the buttery Mexican street corn (served on a wooden skewer) and Myan Chocolate Bomb dessert, which “explodes” inside a coffee mug when milk is added.

The restaurant, operated by Hakkasan Group, also has seven different tacos, three made-to-order versions of guacamole (traditional, chipotle bacon and pomegranate with mint and green apple) and a heavy emphasis on margaritas and mojitos.

Nobu returns with an expanded bar area opening up some much-welcome room near the main entrance. Another old favorite, Pizza Forte (serving Italian by the same family behind Ferraro’s across the street), is back and ready to maximize grab-and-go traffic.

Todd English’s Olives, previously at The Bellagio, arrives in the old 35 Steaks + Martinis space in mid-April following a top-to-bottom renovation that includes a new brick oven. The Kitchen at Commons Club is a casual, full-service sit-down restaurant, while Kassi Beach Club combines the energy of coastal California with Mediterranean-inspired food in a RH-designed dining room that takes full advantage of its poolside location.

The Bar at Commons Club is destined to replace The Center Bar as the resort’s go-to meeting spot. Already casually referred to as the “off-center bar,” it’s next to The Shag Room, named in honor of the shag carpeting and comfy furniture. The ultra lounge is expected to pick up during late-night hours with a DJ, live musicians, bottle service and Sahara-style tents that can be booked as VIP booths. The bars have a strong emphasis on craft cocktails.

The Theater (formerly The Joint and expected to be renamed once a sponsorship deal is in place) will host big-name artists and likely score some high-profile residencies. The staging, sound system and video screens were already top-of-the-line, but the venue was renovated with all-new seating and expanded VIP suites—including a second-floor, 150-person VIP viewing area destined to host corporate parties. Bookings are already taking shape for August. Fingers crossed.

Otherwise, 24 Oxford (named after the address of the first Virgin record store in London) is a 700-person music venue for up-and-coming artists, while Smash Bar is now The Desert Star Bar with old-style video games, blackjack and televisions for sports viewing.

Yet the best place to watch a big game is Money, Baby! in the old Vanity space. The indoor/outdoor lounge has big-screen televisions, sunken seating, dining, multiple bars, adult games (like cornhole and a driving bay for golfers) and roll-up doors to reveal an outdoor deck with daybeds overlooking the pool.

The casino is operated by Mohegan Sun, now the first Native American gaming operator in the Las Vegas resort corridor. In addition to 650 slot machines and 50 table games (including blackjack, roulette and craps), there’s also an all-new sports book and high-limit gaming lounge.

Points for the Mohegan Sun’s Momentum rewards program will be honored even if obtained elsewhere. The casino is also matching tiers for members of The Backstage Pass loyalty program at The Hard Rock—a move specifically targeted toward locals.

Fun in the Sun

The five-acre pool oasis remains under construction with opening day scheduled for May 1. The lazy river and Rehab dayclub are gone. Instead, the outdoor space is now designed as a promenade anchored by the swimming pools, including Elia Dayclub (set to open May 21).  Those in daybeds or cabanas can order food from any of the restaurants on property.

A new event lawn can accommodate 2,000 people for concerts and other occasions. Appearances by The Las Vegas Symphony have been discussed, although no announcements just yet. When things are less busy, the lawn will be a place where visitors can hang out with their laptop, a picnic basket or a latte from The Funny Library Coffee Shop.

The Ruby Tower (formerly The HRH Tower) is all suites with a private VIP entrance, check-in desk and lounge area. The Canyon Tower (formerly The Casino Tower) and Opal Tower (formerly The Paradise Tower) are very similar in design. The Virgin Hotels brand is known for its signature beds with the same style in all rooms. Other standard features include a makeup vanity (separate from the bathroom), mini bar, wet bar and pony walls behind the bed with plugs and features that can be easily replaced when technology improves. Air conditioning, drapes and room service are all controlled by an app.

Most of the 1,500 rooms are ready to go on opening day. The 17 larger spa and marquee suites are still works in progress. The old “Real World Suite” at the top of The Opal Tower is now The Richard Branson Suite and will be a hot ticket for conventions and corporate events. One of the seven suites on the top floor of The Ruby Tower will be converted into a luxury high-roller gaming lounge called Aspire.

The hotel component is affiliated with The Curio Collection by Hilton and part of The Hilton Honors rewards program. However, a big perk for all guests is the “no nickel and dime policy”—no resort fees, no charges for parking, no additional fees for pets and street pricing for in-room mini bars, which means items like beverages and candy bars will be roughly the same price as at the average corner store.

The fitness center is exceptional even for luxury hotel standards and overlooks the pool. Guests can track their progress and program workouts at the touch of a smartphone. Follow up a tough workout with a massage or dip in the Roman-style bath at the spa.

A Positive Outlook for Las Vegas

Best of all, the opening of Virgin Hotels represents growing momentum for Las Vegas as we collectively inch our way out of the COVID-19 pandemic. The new resort is putting 1,600 hospitality professionals back to work, including 1,300 returning from The Hard Rock, and hopes to add as many as 5,000 more employees in the next six weeks.

What is a Burnout? Let’s Stop Glorifying...

Working at a Dispensary Just Kicked into...

Hoodie Up in Honor of a Baseball...