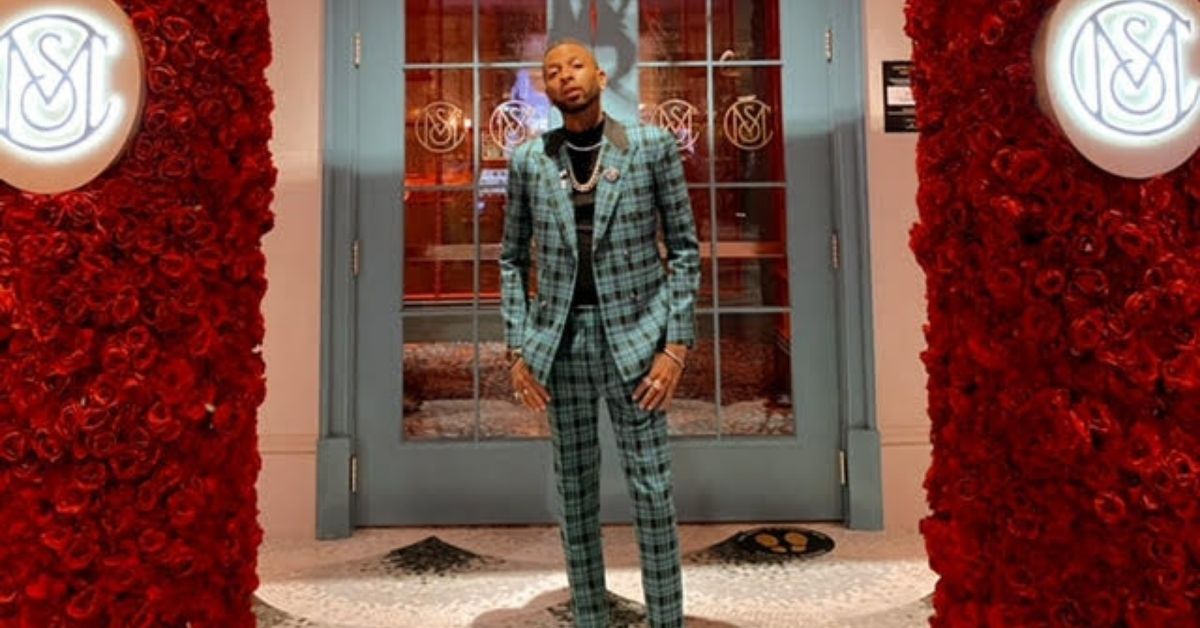 Derek Dominique Gets Up Close and Personal About Making Music

When infectiously optimistic Derek Dominique accidentally ended up in Las Vegas by way of Houston, he didn’t just hit the ground running—he set his eyes on the marathon finish. In the few years he’s resided in the Valley, he’s put himself in so many situations that most artists only dream of experiencing.

He’s had the radio interviews and the podcast features. He’s released a deluge of new music. He’s made some intriguing videos, and he’s written poetic tracks for other musicians. All while doting on his 10-year-old son and 3-year-old daughter. And he doesn’t let anything get in his way, not even a pandemic.

He kicked off 2020 representing the city in a Super Bowl commercial for Park MGM.

He scored a film soundtrack, which will include two of his own original tracks, due to premiere on Netflix on Valentine’s Day. His track “Take a Break for Yourself” was selected and featured on Adult Swim’s pandemic mixtape Stimulus Swim.

It might seem like a lot for one young artist whose looks and artistic versatility channel the late Prince, but it’s just another year in the life of the hustler.

Singer, songwriter, rapper and stylist may represent the highlights of his resume, but he sends his energy wherever it’s needed most.

“My No. 1 thing is I’m a dad. I’m like Dad first because that comes before anything. When it comes to music and fashion, that all goes hand in hand. I may be wearing different hats, but it’s all under one big umbrella.”

A Songwriter With No Genre

When he writes for other musicians, he’s not picky about their sound. Open-minded and nimble, Dominique lets the artist’s vision guide his direction.

“I try to write all kinds of stuff. I try to write a pop song, an R&B song, a country song. Just to have options,” he says of his process when in the studio. “Like, let’s try this out and let’s try this out because you never know. You get in the studio, and it’s not always what you think. You go in planning to do a certain thing. And then it comes out to be something else like, ‘Oh, this is even better.’ ”

Unlike many writers, he rarely agonizes over the melody or even the words. He tackles each project led by its recipient, figuring out their story and writing on the spot.

“So, I try to sit with the artists or talk to them. Like a therapy session, you know, and just kind of go from there. That’s why I don’t like to write a bunch of stuff down before I get to the studio. I just go and they tell me everything that’s going on in their life, and then I can write it from there.”

Wading Through a Pandemic

The last year has represented a big change in many lives, but those in the entertainment world were hit harder than most. Although he didn’t spend the time kicking up his feet, Dominique’s schedule has become more unpredictable.

“This pandemic has the days looking … you just never know,” he says when considering his day-to-day. “All the things I had planned for last year, half of them didn’t even happen because of the pandemic. Whether it was shows or tours, whatever it was, none of it happened. A lot of artists weren’t trying to pay for writing a song, you know, because they were going through whatever they were going through. It got a little weird. Especially with styling because they’re not going anywhere. They’re like, what do I need a stylist for? I’m at the house.”

But he remains eternally positive about the situation. “I mean, I’m not complaining about anything, it will all work out in the end.”

Lessons That Carry Over

Tumultuous times generally inspire the most evocative art and tend to deliver the most poignant messages.

“A big lesson that I’ve learned is never count eggs before they hatch. My mom always said that, you know,” Dominique reflects.  “At the beginning of last year, I started counting on so many things, I was gonna do this, this and this. Then I was like, ‘Wait a minute, none of this is happening.’ ”

To keep his head on straight, he uses exercise, tranquility and nutrition to get through the daily struggles.

“Health is wealth. I always thought like this. But this last year, I put it into overdrive. My anxiety was at an all-time high last year. So, I figured out ways to deal with it. Yoga, meditation, a lot of ginger and cayenne shots and outside activities kind of help take your mind off a lot of things and calms you down a little bit.”

The forward-thinking musician embodies that Houston hustle, and with his relocation, he has adopted the Las Vegas grind, too. Representing two vastly different communities, there has to be some overlap.

“Houston doesn’t have a big entertainment world. I mean, there’s artists. Of course, you have big artists, but it’s not like Vegas. Vegas feels like a melting pot of people from different places that don’t mind helping each other out. Most people that do music in Houston are from Houston. So, sometimes you get a little territorial. Like some people might not want to help you because you’re from a certain neighborhood or a certain part of town.

“I love Houston. Of course. I talk about that in every song and everything I do. But I feel like my musical career blossomed when I got here. I don’t know why, but it did. It could have been because when I got here, it was kind of like a fight-or-flight type of thing. You know, in Houston, I’m comfortable. That’s where I’m from. But when you’re somewhere you’re not from and you’re trying to make it, oh, man, something goes into overdrive. And I gotta make it happen because it ain’t about just me. I got two kids.”

Dominque’s latest single, “Sneaking,” dropped a couple weeks ago, and he continues to put his energy behind pushing that, for now. But that doesn’t mean he isn’t already planning his next move.

“I had slowed down [making music] for a second because I had put out three albums in one year. I put out four albums in two years. I just put a single out two weeks ago, and I was just like, all right, I got to sit on the single because this is the one that’s getting picked up by radio and stuff.

Favorite Song Right Now: John Mayer, “Back to You”

Favorite Non-Musical Passion: Watching chick flicks. Anything with women in it. I love women.

Go-to Brand or Designer: Target. I don’t want Gucci or Louis. I mean, it’s cool here and there. People think I go and spend thousands of dollars on clothes. I’m like, “No, I’m gonna spend $20 on the shirt.”

“I love music so much, and I do it so much that I have to put it out because if I don’t, then it would just be sitting on my computer and my hard drive. And then if I listen to it in three months, I’m not gonna be as excited as the day I did it.”

That’s how I get. That’s why I put out so much music. Not everybody’s gonna like that one song, but if I put 60 songs out, you’re going to like at least one. Whatever you’re into, whether it’s pop or R&B or rap. Or if you’re into EDM or Latin music songs where I sing in Spanish. Whatever you’re into, there is something for you to grab. I like to be in every genre. “

The Mark of Making it

Equipped with big aspirations, backed by an unmatched hustle and versatile talent, but when the question is posed about what making it means to him, his ambitions are more selfless.

Beyond his generous spirit, he has remains grounded with just one message to his fans and appreciators.

“I’m just an everyday person, just like you. I just have a different talent than you have.”