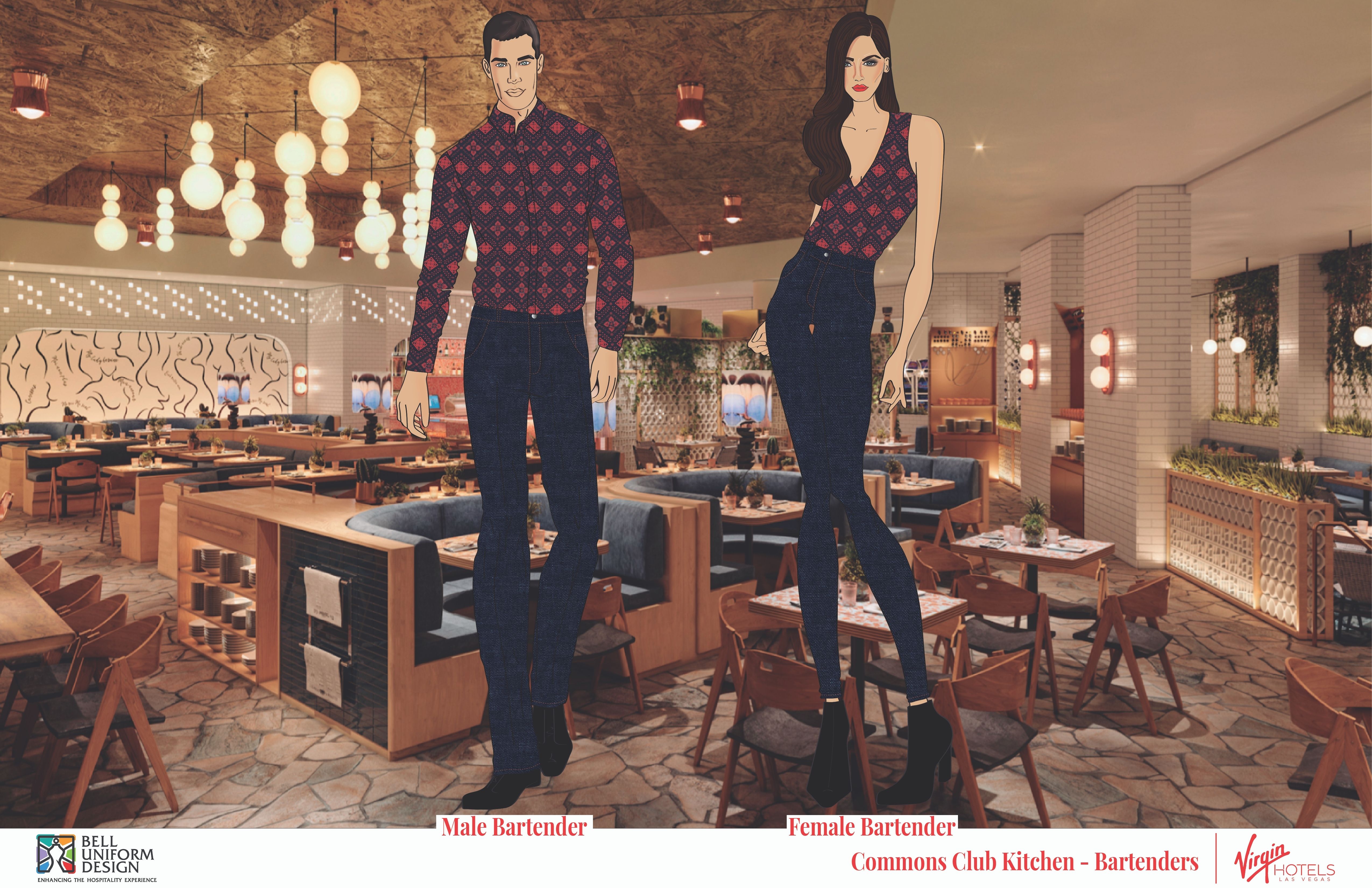 Virgin Hotels Las Vegas released the uniform concepts for the reimagined off-strip property set to open in early 2021, and the chic and thoughtful designs remind us that costuming is a major part of this city’s archetypal image.

In other cities, the word uniform evokes imagery of military fatigues, the blues of law enforcement or maybe even the unflattering garb of the staff at your favorite fast-food joint. In the resorts, casinos and clubs of Las Vegas, uniforms are sparkly cocktail dresses, dapper suits and pressed formal wear. A resort’s uniforms aren’t simply an outfit, they’re eye-catching costumes, representing a major element of a resort’s brand. And because of this, they must be meticulously designed.

That’s why Virgin Hotels Las Vegas called on locally based Bell Uniform Design to create a uniform program that embodied the casino resort’s branding, while also ensuring that the staff felt comfortable and stylish while at work.

To match the rebranded hotel casino’s aesthetic, the collection melds neutral colors, clean lines, and a striking, modern look. Taking the job of the wearer and the desert climate into consideration, lightweight and breathable fabrics were used to provide both comfort and style. This attention to detail is an important component to Virgin Hotel’s brand, according to Bell Uniform Design’s president and CEO, Barbara Bell.

“Virgin Hotels uniforms whether it’s Chicago, Dallas, Nashville or Las Vegas do not look like uniforms.  They have a trendy edge to them.” She says, “Many properties get stuck on what has been worn for years, but Virgin Hotels is always open to new ideas and thinking outside the box. Their focus is 100% the person wearing it.”

Natural desert tones of khaki, rust, burgundy, and olive are layered in with the custom prints that are exclusive to the Vegas resort. Each of the coordinating pieces and outfits for various parts of the property have a strong desert theme. But we’re not only talking about the Mojave.

“The overarching concept is desert modern with a hint of the unexpected – think Burning Man or Marfa” Bell said. “In the higher end areas of the property, there is still a mid-century desert modern vibe, but more rat pack in Palm Springs. The pool areas are Tulum meets Greece but again, leaning into the desert environment and celebrating it.”

The scrupulous attention to detail goes beyond the visual element and extends into the way each uniform fits. Unlike many properties, Virgin Hotels Las Vegas will give team members the opportunity to select which uniform works best with their body type and personality.

“This uniform collection was designed with an understanding that they need to fit all body shapes and sizes, as well as serve each teammate for their daily tasks.” Bell points out. All ensuring that the staff feels confident while working.

The Thoughtful Process of Uniform Design

In a place where uniforms are a quintessential element of a property’s presentation, there is a full-scale methodology that must be considered. Bell has designed uniforms for many companies in the valley, but her process remains the same.

“Getting to know the client and the team is first. That includes researching the brand and past projects to get a sense of their style and then finding out if they are looking to stay in their lane or get outside of their comfort zone.” Bell says. “I can usually see this when I review the interior designs for the hotel. Then I coordinate the uniforms accordingly.”

Once an inspiration is set, the components can be put together in a way that makes sense for the job duties, environment and individual. This is where the designer’s experience and know-how come into play. Bell worked with Virgin Hotels Las Vegas for over two years to finalize this uniform program, which allowed her to tailor the fits to the staff who’d be working in the pieces every day.

“Fabrics must have stretch to be comfortable and silhouettes need to be forgiving. The waistline is probably the most requested area for comfort and forgiveness.” Bell says. She created several options of belting for the various styles to ensure maximum comfort. “Sash belts can be adjusted at the waistline, as we know your waistline can fluctuate daily. The stretch braiding allows you to close the belt where it’s most comfortable.  I would say that the majority of the uniforms are unstructured with a focus on comfort.” She continues.

Expertise Built Through Experience and History

Much like a casino teammate’s uniform is part of the culture of the city, Las Vegas’s history is an indelible part of the designer. Bell is a Las Vegas native, whose upbringing in the hospitality industry has inspired her style.

“Growing up I heard stories of Las Vegas from three generations.” She remembers. “My maternal great grandparents moved to Las Vegas in 1929. Later my great grandpa was on the Planning Commission. My grandfather owned Nevada Irrigation that installed the original landscaping of Caesars Palace. My dad moved to Las Vegas in 1960 when his father became wing commander of the Thunderbirds and then commander in 1963. My father started his casino career in Las Vegas as a dealer in 1969 starting at The Horseshoe, then on to The Fremont, The Union Plaza, Bonanza and lastly The Dunes. He left for an opportunity with Caesars Atlantic City in 1979 but returned in 1993 to work for Caesars Palace, named president of the resort in 2001.”

Although she gained her design education at LA’s prestigious Fashion Institute of Design & Merchandising, she brought her proficiency back home, melding fashion with uniforms. Leaning into her Vegas roots.