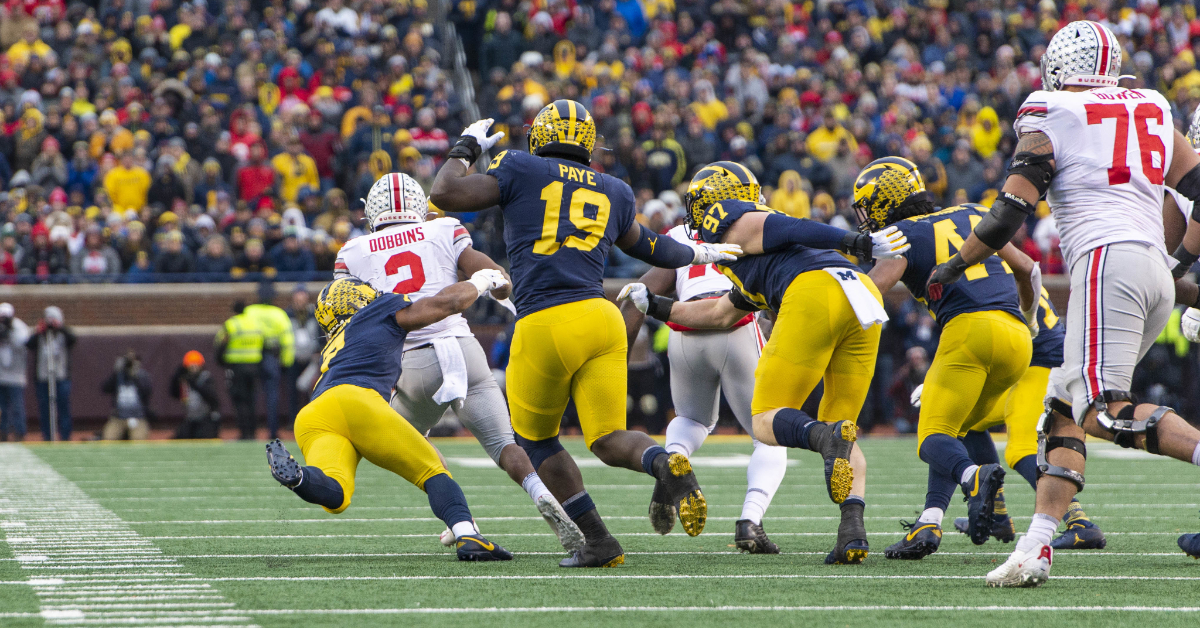 The 2021 NFL Draft is going to be big for the Las Vegas Raiders.

With an ugly salary cap situation and roster holes at several levels, they need to make sure they pick an impact player at 17th overall.

A porous defense was the team’s downfall in 2020, so they will almost surely use their first selection on that side of the ball.

Here are three options the Raiders can look to target on April 29.

The Raiders linebacking core received a significant investment going into 2020, but the returns were middling at best.

Jeremiah Owusu-Koramoah would give the team a young building block to insert in the middle of their defense, and his versatility allows him to fit into a variety of schemes.

Owusu Koramoah tallied 55 tackles, three forced fumbles, 1.5 sacks and one interception last season for the Fighting Irish. The team made it all the way to the College Football Playoff, and his play was a big reason.

He is a tad undersized at 6-foot-1, but his speed and athleticism allow him to cover larger tight ends. That sounds mighty appealing in a division that features the ever-dangerous Travis Kelce.

Perhaps the weakest part of the Raiders in 2020 was their defensive line. Their lack of pressure on the quarterback was arguably the biggest factor in the defense’s deterioration.

Enter Kwity Paye, a monster edge rusher with an enticing skill set. The 6-foot-4, 272-pound defender is an exceptional athlete for his size. He actually ran relay in high school, that is how impressive his straight-line movement is.

The two-time All-Big Ten player tallied 99 tackles and 11.5 sacks across his four-year tenure in Ann Arbor. The stats do not jump off the page, but a look under the hood paints a clearer picture.

According to Pro Football Focus, Paye generated 22 pressures and a pass-rushing grade of 87.1 across just four games in 2020. With an NFL coaching staff honing his skills, he could be a serious threat on the interior.

Following a similar theme to Paye, Gregory Rousseau is another massive defensive lineman who can cause havoc off the rush. He is also a strange player to evaluate, as he opted out of the 2020 season because of COVID-19 concerns.

He checks the boxes from a physical standpoint, as his 6-foot-7, 265-pound frame is a nightmare for opposing offenses. Combine that with elite athletic tendencies, and you have a serious recipe for success.

When he was on the field in 2019, Rousseau was a dominant force. He recorded 54 tackles, 15.5 sacks and 19.5 tackles for loss. Inserting him on the opposite side of Maxx Crosby would give the Raiders two legitimate threats off the edge.

There is risk here, however, and not just because of his absence in 2020. Rousseau’s 2019 sack count seems inflated after looking at the analytics, and it is reasonable to wonder if his pass-rushing technique can catch up to his sheer athleticism.

Rousseau has a remarkable ceiling if things break the right way, but this option is a little more perilous. Either way, the Raiders are going to get an impact defender at 17th overall.