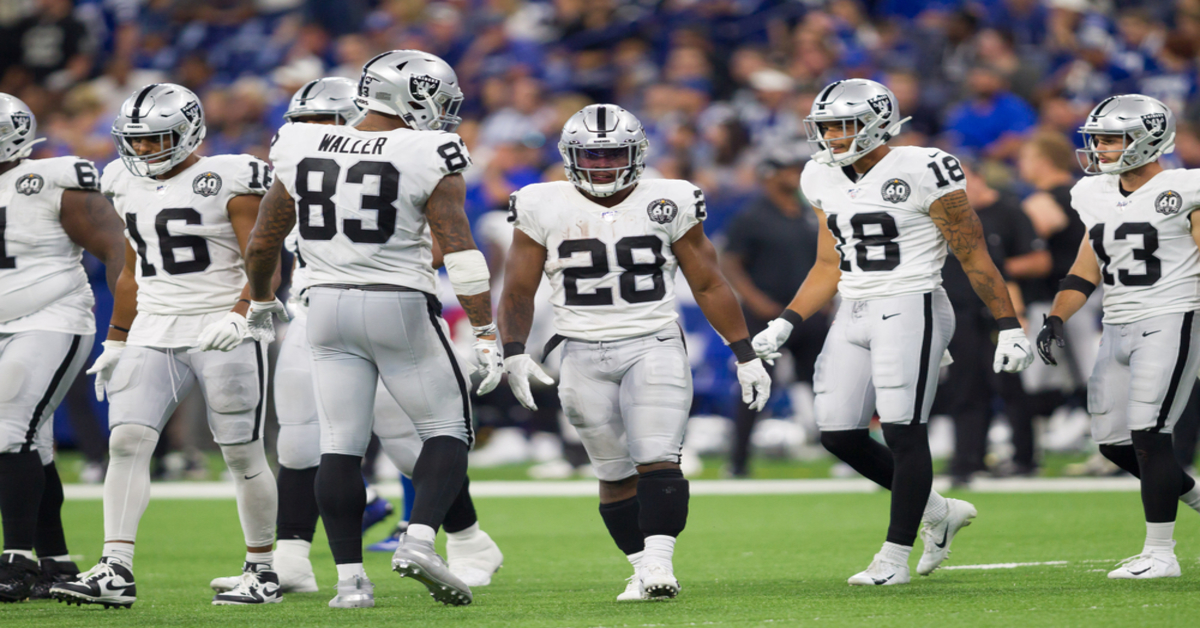 
On the heels of back-to-back losses, the Las Vegas Raiders desperately needed a win against the New York Jets in Week 13.

Even though their opponent came into the game with an 0-11 record, the Raiders trailed 28-24 with just 13 seconds to go.

It was not a pretty effort, but style points do not matter at this time of the year. The win gave them an opportunity to control their own playoff destiny, starting in Week 14 against the Indianapolis Colts.

While certain parts of the Raiders’ offense struggled on Sunday, Darren Waller soared to the best game of his career.

The star tight end put up 200 receiving yards and two touchdowns on 13 receptions in the contest. He is the only TE since 1950 to have a 13-reception, 200-yard, two-touchdown game. Similarly, Waller had 106 yards after the catch, becoming the only TE to top 100+ YAC in a game this season.

Waller has become one of the top players at his position. He ranks second in almost all statistical categories among tight ends, with 77 catches for 742 yards and seven touchdowns in 2020.

“I would say it’s easily the best game I’ve had statistically,” said Waller after the game. “I just try to live one day at a time and make one play at a time, and then stuff like that adds up.”

One of the major reasons for Waller’s success is the chemistry he has formed with Carr. “We know how special he is,” Carr told reporters. “I love throwing him the ball. I love competing with him, taking the field with him. 200 yards as a tight end on 13 catches, that’s just ridiculous.”

Carr backs these statements up on the field, as the tight end’s 108 targets are almost double the next closest player on the team.

Waller’s elite play is a promising sign for a team that needs significant contributions in their playoff race. After being snubbed last year, it also seems likely that fans will vote Waller into his first Pro Bowl appearance. Hopefully, he can keep his momentum going against the Colts next week.

The Raiders have struggled to put pressure on opposing quarterbacks all season. They came into Week 13 with one of the worst pass rushes in football, tallying 12 sacks across their first 11 games.

The fourth-overall pick from the 2019 draft, Clelin Ferrell, has not helped the team’s pass rush as much as expected. While he has had some standout performances in his young career, he had yet to record a sack in 2020.

Making matters worse, Ferrell missed the team’s previous two games because of a bout with COVID-19.

Alas, in Ferrell’s return to the field against the Jets, he stood out in a big way. He forced two fumbles on two quarterback sacks while also tallying six tackles and a pass defended.

It was the effort the team has been waiting to see from their top defensive prospect and one that earned the praise of head coach Jon Gruden.

“He made some impact plays, and that’s what we need from him. He’s a hard-nosed, energized, finishing player, and he’s got a lot of football character that we’re going to lean on.”

In the future, a continued boost to the pass rush from Ferrell would significantly improve the Raiders’ playoff hopes.

The Raiders desperately need to get healthy ahead of their Week 14 matchup with the Colts.

Josh Jacobs and Johnathan Abram both missed Sunday’s game, significantly hurting the team on both sides of the ball.

In addition, the Raiders lost cornerback Damon Arnette and safety Jeff Heath to concussions during the game. Seeing as it was Arnette’s second concussion in a week, his status for the Colts game seems doubtful.

Despite that, getting the other three players back would serve as a monumental boost to the team’s chances.

Jacobs is one of the top running backs in football, and the Raiders’ backfield was noticeably stagnant without him. On the other side, Abrams is the team’s leading tackler while Heath ranks as one of the best safeties in football.

It is also likely that the Raiders get star right tackle Trent Brown back this week. The team activated him off of the COVID-19 list ahead of the Jets game, but he ultimately did not play. With an extra week of practice under his belt, it appears as though he will be ready to play against the Colts.

It is an all-hands-on-deck type game for the Raiders, as a loss would drop their playoff odds to just 24 percent. On the other hand, a win gives bumps their chances to 73 percent with three games to go.

A fun, albeit stressful week lies ahead Raiders’ fans.