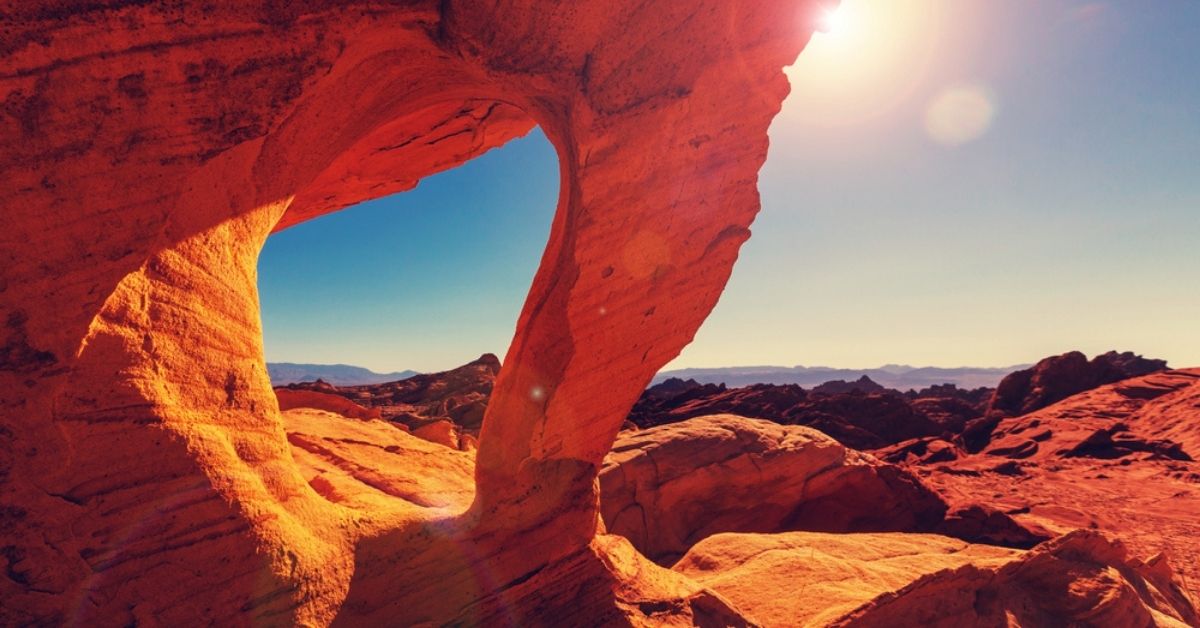 4 Reasons to Explore the Unique Hiking Trails Near Las Vegas

Beyond the neon, visit breathtaking places only found in and around Nevada

Not far from Las Vegas lies hiking trails with petroglyphs, tunnels and inspiring views that take you away from the city that never sleeps. As we protect these precious national parks—and the animals that call them home—we preserve the stories of those who walked Nevada long before us. Here are four reasons to venture out of town and retreat into nature.

The Petroglyphs at Valley of Fire

Carved into the crimson Aztec sandstone nearly 2,500 years ago, according to Nevada State Parks, archaic petroglyphs can be seen throughout the area; however, the easiest way to get a glimpse of this ancient art is by hiking along the Petroglyph Canyon Trail. This is a fairly easy hike that is less than a mile long. To see these historic symbolic writings, created by an early Pueblo culture known as Basketmakers, take the Mouse’s Tank Trail located north of the Visitor’s Center. To enter the park, there is a small fee of $10.

The Sailing Stones in Death Valley

Besides being the hottest National Park, Desert Valley is a mysterious place—including the strange phenomena of stones moving across the Racetrack—also known as a playa, or dry lake bed. Nevada State Park Service says that some of the moving rocks have traveled 1,500 feet across the lake bed. Traveling to this secluded area is tricky and requires durable tires to withstand its rough, remote road. However, it’s worth the trip, even if it’s a bit rocky. To venture here, begin the journey near Ubehebe Crater. When you reach Teakettle Junction, follow that road until arriving at the Racetrack Playa. Twenty-six miles in, find yourself at the north end where you’ll see the Racetrack and the parking area, Grandstand. Two miles south of Grandstand, see the sailing stones with your own eyes; unfortunately, you most likely won’t witness them moving. According to the Nevada State Park Service, it takes a “rare combination of events” for it to happen. The entry fee of $30 per vehicle sounds high, but it’s a pass that lasts for seven days.

The Keystone Thrust is a fault formed by compressional force of tectonic plates resulting in multiple layers of prehistoric rock. Over time, this pushed up the older rock on top of younger rock creating a reverse fault. The tectonic process takes time and occurs over millions of years, which means you’re standing and hiking along formations millions and millions of years old. On the hike, see all the beautiful layers of colorful fiery Jurassic Aztec Sandstone, which is why we call it Red Rock Canyon, and striking layers of dark gray limestone from the Cambrian Bonanza King formation, dating over 500 million years old. The cost to enter is $15 per vehicle.

The trail is a moderate hike, but a geological wonder in Nevada. In my Geography college course, the professor led us through this hike explaining it’s extraordinary features. Unfortunately, my phone died at the beginning of the hike, which left me with no camera. However, I still had an opportunity to learn why it is so special.

The Historic Railroad at the Lake Mead Conservation Area

Lake Mead is known for its man-made body of water, but it’s a disservice to this scenic gem not to talk about its fascinating hiking trails like The Historic Railroad. This an easy and unique hike that is a great trail to bring furry companions along or ride your bike. There are many interesting facts about this trail. For starters, the National Park services says the trail preserves the only remains of the Hoover Dam Railroad system that is neither highly damaged or underwater. Also, it is where the Clint Eastwood movie, “The Gauntlet,” filmed its adrenaline pumping scene of a motorcycle on the run from an assassin in a helicopter. The tunnels are filled with great photo opportunities and are fun to walk through. The daily pass for a non-commercial vehicle costs $25.

Next Read: Fireworks in Los Cabos and a Hip Hotel in Minneapolis