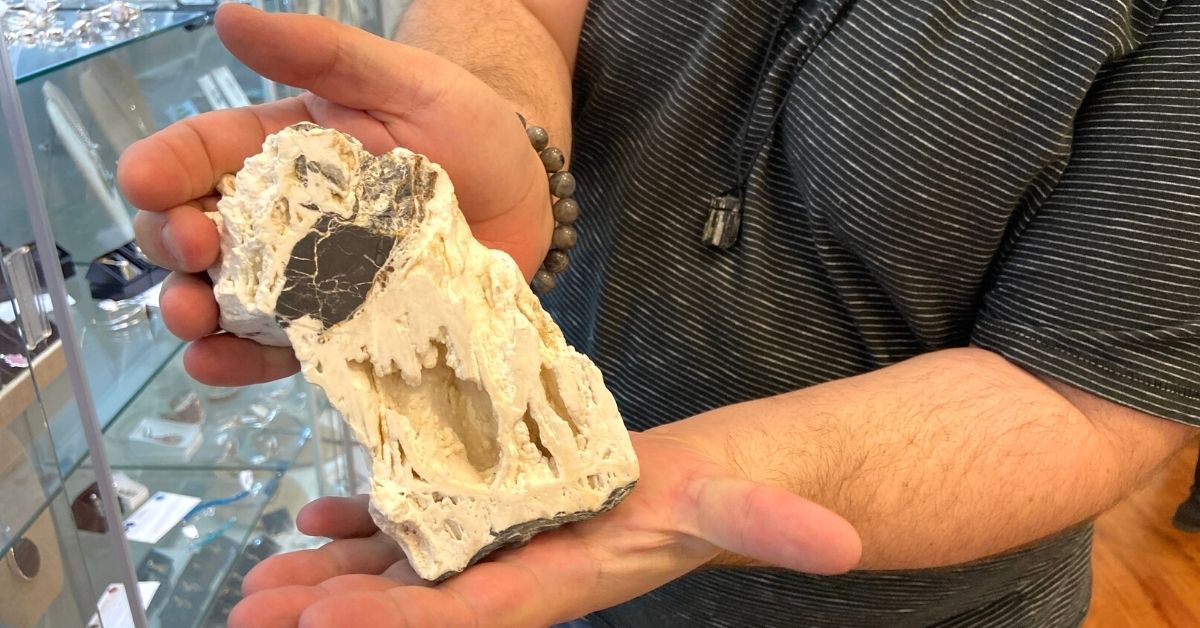 Near Tonopah, Nevada, found within the mineral veins of Dry Creek Mine, the Otteson family became the gatekeepers of precious turquoise-including the mysterious and rare White Buffalo Turquoise.

• The only mine known to be the home of White Turquoise is in the Dry Creek Mine in Tonopah, Nevada.

• The stone’s name derives from the Native American’s belief that White Buffalos are pure and rare just like the stone.

• Howlite, calcite and magnesite are often mistaken for white turquoise also known as White Buffalo Stone. This sparks controversy on whether White Buffalo Turquoise is even real or not.

• The metaphysical healing properties of the White Buffalo Turquoise are happiness and good luck.

The Origin of the Sacred White Buffalo

The legend of the White Buffalo Calf Woman became a powerful and celebrated belief among many Native American tribes including Lakota, much like faith-based traditions such as Christmas or Hanukkah.

According to the Atka Lakota Museum and Cultural Center, long ago a famine plagued the tribe during a scorching hot summer. With no game in sight, two men agreed to leave the tribe and go hunting. While searching for game, a beautiful wakan (holy) woman in white floated across their path.

One of the men lusted for her. He reached out his hand to touch the woman in white. Before he could lay a finger on her, a large cloud consumed him until he became nothing more than a pile of bones. She told the other hunter to return to his tribe and tell them she was coming.

When she visited the tribe, she brought a sacred pipe and taught them how to use it for prayer. Before she left, she assured them that she would return. As she walked away, she rolled over four times until she transformed into a white buffalo calf. After her visit, they continued the practice with the holy pipe and experienced an abundance of buffalo.

Aaron Sidranski, owner of Silver Post, a metaphysical and jewelry store in Downtown Summerlin, says it is a “power stone” popular among Reiki and Kundalini Yoga practitioners because the stone symbolizes balancing both light and dark energies.

“Crystals don’t have power, but we do. We manifest it,” he says, when asked if he believes in the magic of crystals, “What the crystal symbolizes, you create that magic.”

Before he became the owner of Silver Post, he sunk into a dark place. Misery consumed him in his corporate job and unhappy relationship. Sidranski contemplated ending his life until a crystal fell out of his pocket that reminded him of his happy six year old self playing with crystals. He quit his job and left his girlfriend.

After his father passed away, he decided to follow his passion and take over the family business. His life transformed when he returned to his family roots and married a love that supports his crystal business.

As he proudly runs his third-generation family-owned business, he feels that same spark of happiness from his childhood again.

Sidranski believes in the power crystals have to “drive people to positivity.”

Part of what typically defines turquoise is its metallic properties which contribute to the stone’s sky blue or sea green color. However, White Buffalo Turquoise is usually a white to cream color and lacks that defining characteristic.

Sidranski says he calls it White Buffalo Turquoise because that is its name. The gem received its name from the Ottesons who mine the crystal in Nevada. However, some believe that despite the stone’s black spider webbing pattern and similar turquoise properties, that a more accurate name would be The White Buffalo Stone. The information card on display with the stone at the Silver Post explains that the magnesium found with the stone bleached the turquoise’s pigment.

Where To Find White Buffalo Gems in Las Vegas

These gems are rare, unlike rose quartz or amethyst, which makes them more of an investment. Since White Buffalo Turquoise has only been found in Nevada mines, it’s not as well-known as other mainstream crystals that are formed all over the world.

Whether you love unique authentic Native American jewelry or would love a new crystal to manifest positive energy, this local family-owned store sells a wide variety of handcrafted pieces you won’t find anywhere else. Silver Post has many famous and well-known public figures as clients including our Insta BFF Mercedes from Mix 94.1 who recently visited the store to look at the popular and powerful stone, Moldavite. Watch her walk through at the store in her TikTok below.

Crystals and my search for #moldavite. They say it finds you when you’re ready. Thanks for the great information @m0dizzl3 ! #crystals #vegastiktok

If you want to get a glimpse of the precious White Buffalo gem, Silver Post sells them as beautiful pieces of jewelry handcrafted with Nevada silver. Purchases can me made on Etsy (which receives about 6,000 orders per month) or at Silver Post (main location) and Silver Post Collections by appointment (luxury crystal home decor that has sold to local celebrity clients) in Downtown Summerlin.